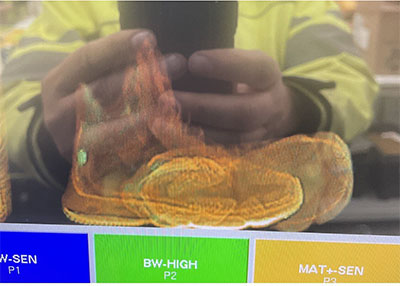 An attempt to sneak high-risk seeds into Australia in the heels of running shoes, has been foiled by biosecurity officers conducting routine parcel checks at a facility that handles international mail and imported air cargo in Brisbane.

Department of Agriculture, Fisheries and Forestry Deputy Secretary of Biosecurity and Compliance Dr Chris Locke said bags of pumpkin (cucurbita sp.) and nightshade seeds (solanaceae) were concealed in a pair of sneakers mailed from Burundi in east-central Africa.

“Both seed types did not meet import conditions and are known to harbour diseases including melon necrotic spot virus (MNSV) and tobamoviruses, which if spread into the community could cause widespread devastation to many of Australia’s vegetable crops,” Dr Locke said.

“Some people don’t seem to understand the consequences of infected plants and plant material, including seeds, being illegally sent through the mail. MNSV and tobamoviruses put at risk many

The parcel had been mislabelled as containing new shoes, a leather jacket and a denim outfit for a child.

The shoes immediately drew the attention of the inspecting biosecurity officer because they were dirty and not new as declared.

The officer found a hole in both heels of the shoes. He carefully inspected the cavities to discover the poorly wrapped seeds.

The seeds were identified by a DAFF botanist and the concealment confirmed with a new, oversized X-ray, supplied to DAFF by the Australian Border Force (ABF). Oversized X-Rays are used to screen larger packages, so we have the capability to screen small to large parcels arriving into the country.

Arriving via the DHL Express centre, any mail containing imported goods below $1000 can be inspected under Self-Assess-Consignment (SAC) processes, making it subject to DAFF and ABF scrutiny.

MNSV was detected in watermelons and rockmelons in isolated outbreaks in NSW (2012), Victoria (2016) and Queensland (2018), causing whole crops to be destroyed.

Tobamovirus can infect some weed species including prostrate pigweed and creeping cucumber and is detrimental to the farming sector.